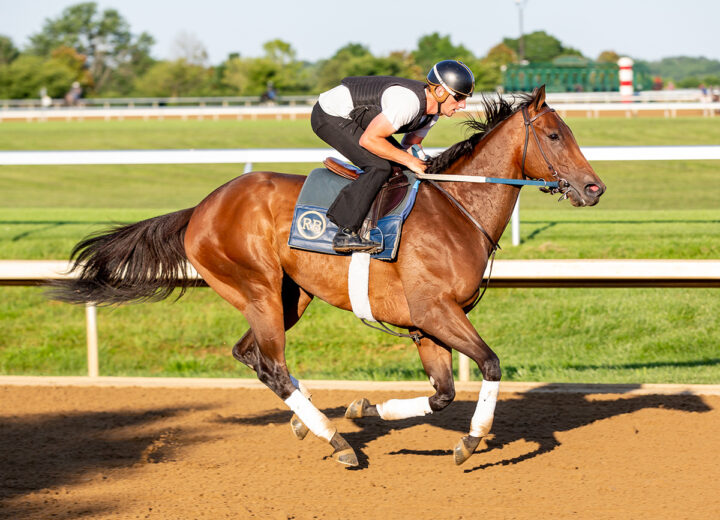 Impressing many at the 2019 Fasig-Tipton Gulfstream Sale with a display of ability during the breeze show, an imposing daughter of Malibu Moon demanded a price tag of $750,000. WinStar Farm signed the ticket, eager to add the promising filly to the WinStar Stablemates Racing program. Given the name Crystal Ball, the filly presented a world of potential, but it would take some time for luck to be on her side.

Crystal Ball would not debut until May of her 3-year-old year, facing eight other fillies and mares in a one-mile maiden special weight at Santa Anita Park. Managing third in that spot, she was primed for victory next out. Against a short field in a mile and one-sixteenth maiden special weight at the Arcadia, California racetrack, Crystal Ball led from start to finish and never looked back, coasting to a 6 ¼-length lead.

Despite a long journey to get her to the races, the tall, muscular filly had finally shown the talent Team WinStar had believed she possessed all along. In fact, her performance impressed the team enough to take a leap of faith that next landed her in grade one company. With the Coaching Club American Oaks (G1) coming up with a short field, the decision was made to ship Crystal Ball across the country, where she would face fellow Stablemates filly Paris Lights at Saratoga.

Just to the inside of Paris Lights, Crystal Ball was urged by jockey Javier Castellano to take the lead as the group of five fillies galloped into Saratoga’s clubhouse turn. She maintained that position throughout, setting steady fractions as she led the fillies around the historic racetrack. Paris Lights began to pressure her around the far turn, and Crystal Ball was asked for more by Castellano. She dug in as Paris Lights drew even with her, and the pair of fillies in black and gold put on a show down the stretch, as Stablemates members kept their eyes glued to television screens across the country.

Running far too good to lose, she was edged by Paris Lights in the final strides, missing victory by just a head but claiming a grade one placing off a hard-fought effort.

It was later discovered she’d grabbed her foot in her runner-up finish in the Coaching Club, making her performance all the more impressive. Off such a strong effort against grade one company, she was entered in the Alabama Stakes (G1) at Saratoga against Preakness Stakes (G1)-winning filly Swiss Skydiver. She went for the lead yet again, but succumbed to the pressure of Swiss Skydiver and faded to fifth in the mile and one-quarter event.

Due to soundness issues caused by wear and tear, Crystal Ball was sent back to WinStar Farm for the remainder of the year. By December 2020, she had departed the farm and returned to the racetrack, where she resumed breezing. While it would of course take her time to regain racing fitness, she unfortunately did not see the entry box until the spring because of a lack of races available.

But when Crystal Ball returned to post, it was as if a bigger, stronger version of her had emerged. In her four-year-old debut, she would not be denied, decisively winning a first level allowance at Santa Anita. A month later, she did the same at Churchill Downs, clearing through her next condition.

After being transferred to the barn of Rodolphe Brisset and making Keeneland her new home, sights were set on a return to stakes company for Crystal Ball. Before diving back into graded stakes competition, Crystal Ball was aimed for the $250,000 Lady Jacqueline Stakes at Thistledown. After pressing the pace throughout, Crystal Ball took the lead around the far turn and put away her rivals by 1 ¼ lengths.

That day, Crystal Ball created an unforgettable memory for Stablemates member Rebecca Teal. This particular race held a special place in Rebecca’s heart, as it shared its name with her late mother Jacqueline. But when she was asked to lead Crystal Ball into the winner’s circle, the victory became etched in her memory forever.While that would unfortunately be Crystal Ball’s final career victory, her journey was not over. She took Stablemates on an exciting ride, competing solely in graded stakes in her final four starts. With Stablemates in attendance for each race—at Saratoga, Churchill Downs, and Keeneland—she continued to enchant members.

On a beautiful day in upstate New York, Crystal Ball charged down the Saratoga stretch to finish a game third in the Shuvee Stakes (G3).

On a September night beneath the twin spires, Crystal Ball thrilled members with a spine-tingling duel with Kentucky Oaks (G1) winner Shedaresthedevil, finishing second by just a neck in the Locust Grove Stakes (G3).

On a warm, sunny day in the bluegrass, Crystal Ball gave members a grade one experience as she competed in the Spinster Stakes (G1), finishing fourth to powerhouse Letruska.

And on a cold, rainy Thanksgiving Day in Louisville, Crystal Ball ended her career in the Falls City Stakes (G2). While the result that day was not the one hoped for, Stablemates gathered to wish Crystal Ball farewell and cheer her on one last time.

Now, Crystal Ball has returned home to WinStar Farm, where a new career awaits her. She will join the farm’s broodmare band—the same band that has produced enough racing stars to land WinStar two Eclipse Awards for Champion Breeder. A likely visit with two-time Horse of the Year Curlin awaits her in 2022, as do days of enjoying the rolling hills of the bluegrass. While a new journey awaits Crystal Ball, we thank her for the exciting one on which she’s taken Stablemates.